At a time when nothing was sacred, everything real was artificial, and “America” was the culprit: we found freedom in the music – we found our Jesus and our Kubrick. Justice’s 2007 release Cross was the literal presentation of Arcade Fire’s standout album; the neon bible was authentic synth soul. The French came to the rescue again – via Gaspard Augé and Xavier de Rosnay – in a musical Yankee liberation movement. Cross was the 21st Century Lady Liberty, a shining beacon of hope for the sonically stranded stateside souls. Before Justice, it was just us brother – lonely.

When something falls out of place, take your time and put it back… to the start we go as Cross opens with “Genesis.” This is the kind of track that takes you back to confession, kneel before the turntable altar: because Justice is taking you to Church – not merely metaphysical, but a complete out-of-body spiritual experience.

Their aim with the recording was a “disco opera:” win. The glitter, glitz, and glam fab of a disco, the language-barrier-transcendence and technically precise theatrics of an opera and the dark Euro supremacy of a hipster French duo: yes. please.

Sonically, begin with the sampling mastery of DJ Shadow (watch this space). Then build with the structured symphonics of Clint Mansell, add the dramaturgic sonic aesthetic of Star Wars meets Space Cowboy, and you have an epic masterpiece – modern or otherwise. The foundation is strong, dark, urban, cosmopolitan, subterrestrial and – like the Beatles’ oft-spoken “she” – so heavy.

2010 hasn’t changed my preferences from 2009, I still fiend for complete works. I adore albums that are true bodies of work: Justice kindly obliges. They have the full bass of a heartbeat (and the on-off percussion tweaks of, well, a tweaker’s heart), the calcium-fortified keyboard/piano/organ work that reinforces the aforementioned skeletal structure, and from there they flesh it out – work it out until you rave/vogue it out like the House of Dutre in your own special way – with synthesizing and brilliant sampling from funk, to metal, to rap, to pop.

It is their sampling that makes the album amazing. Rhythmically and instrumentally, of course Cross is set – it sounds like this: 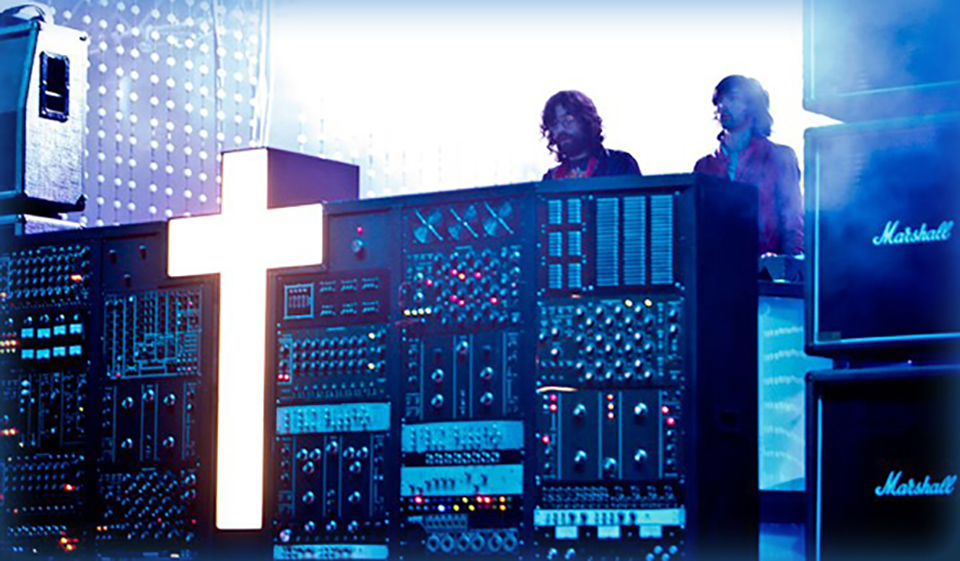 However, like the collective Biblical scribes of old, Justice’s craft is in their uncannily precise collusion.

“Say we use the ‘In Da Club’ hand clap – not even 50 Cent would notice but if you listen to ‘Genesis,’ the first track [on †], there are samples of Slipknot, Queen and 50 Cent, but they are such short samples no one can recognize them. The ones from Slipknot, for example, are just tiny bits of the voice.”

Thus is the crux of a true Pop – yes, Pop – musician’s artistry – the originality and innovation in concealing one’s sources in their work; not by hiding or swaggerjacking, but rather recreating and reconfiguring the inspiration to construct a whole new piece.

“Do the D.A.N.C.E, 1234 fight!
Stick to the B.E.AT. Get ready to ignite.
You are such a PYT catching all the lights.
Just easy as ABC, that’s how we make it right
…
The way you move is a mystery.
Do the dance. You’re always there for music and me
…
Under the spotlights, neither black nor white.
It doesn’t matter – do the dance.”

Fast forward. (Forgive me for slipping into the “fluff-pop” place) Ke$ha’s “Tik Tok” is Justice’s “The Party” vocals mixed with Gaga’s “Just Dance“ beat – Cross: still kickin’. (Sidenote: you would think that a merger of those two iconically zeitgeist tracks would begat further greatness, but alas – thanks, but no thanks diddy.)

From “Genesis” through to “Waters of Nazareth,” Cross is the Good-Book-on-Tape. “Let There Be Light” is what Joseph no doubt boogie-downed and discoed to in his Technicolor Dreamcoat. Sandwiched between the Biblical bookends are tracks that express the darkside of the dancefloor: “Phantom Pt. 1” and “Pt. 2,” “Stress,” and the not-my-brother-bandmate-or-dancebuddy’s-keeper-esque “New Jack” that works a magic blacker than Wesley Snipes. The light and the dark – Justice: served.

If history has taught us anything – like America would listen anyway, Roman decline anyone? – it is that when it doubt: think, live, breathe, be French. Whether French by citizenship: Rousseau, Voltaire, Manet, Monet, Degas, Gaultier, Givenchy, Dior, Laurent, Guetta, Space Cowboy (Where did we meet? In space); or by fate (force, what’s the difference) Frida, Josephine, Paul Robeson, Warhol, Richard Wright, James Baldwin, etc. art and culture need France like American culture needs New York – in that way where non-natives act as if they don’t need it, because they’re envious of those who have it.

The French don’t care – they just create and eat cake.

History (read Talladega Nights) taught us that France gave us three things: democracy, existentialism, and the Ménage à Trois – thank God Justice is here to put them all on vinyl. In a time when a moment is a moment too much to make – much less remember – a masterpiece, a time where hipsters don’t got no salvation, and got no religion, Justice rewound that and recorded the Hipster Bible: unforgettable.