This edition of Follow Friday is an homage to those District Attorneys who made the enigma that was @swiper_bootz a reality. It was these TwietCong that welcomed me into their sandbox and showed me how to run the playground that is Twitter. So here they are: DC’s Finest: 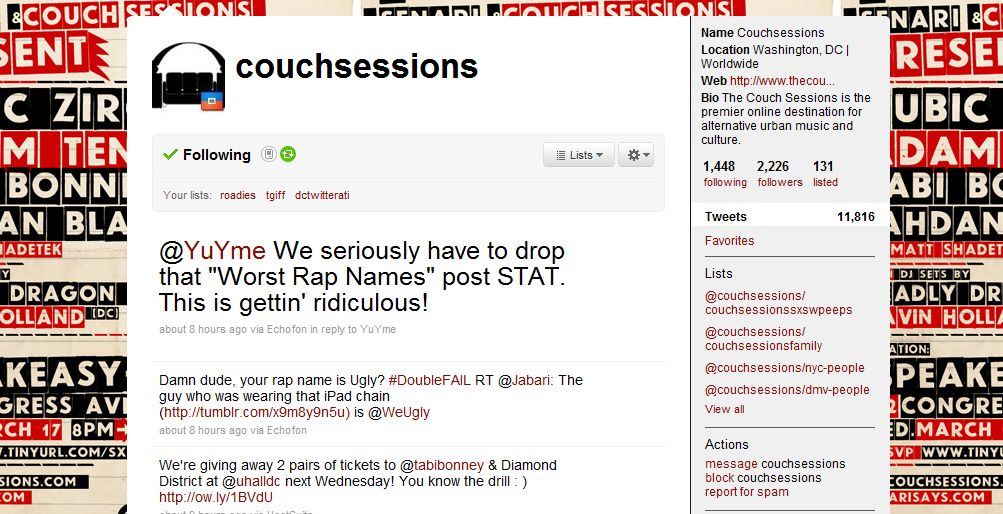 The Couch Sessions is the premier online destination for alternative urban music and culture. The online magazine, created in 2005, covers emerging artists in hip-hop, R&B, electronica, house, rock, and all things in between, and has attracted tech savvy and progressive music lovers from around the world who are seeking new, underground and underheard talent. In addition to it’s flagship website, The Couch Sessions is leveraging its brand through Facebook, and Twitter attracting visitors from over 20 countries. With a readership that spans America’s largest urban markets, The Couch Sessions has consistently been ahead of the mainstream, solidifying itself as a destination for a new generation of iPod armed consumers who are on the cutting edge of technology and music.

Why Follow: Winston is the sonic connoisseur. In the midst of two line “hot or not” blog posts that satiate only 12 year old’s case of ADD, Ford – and Dowling – take time to delve and appreciate music; translation: they cultivate culture.

DJ Lil’ Elle is more than a DJ, she is DC’s club pulse. She can be found anywhere from DC, to Miami, to Cali – at any given venue, club, or music conference – bringing her signature sound to the masses. Lil’ Elle mixes and mashes hip-hop, rap, electronic, dubstep, anything that sounds good she will make sound better – period.

Why Follow: The same reason you would follow her in real life – to get on the guest list of wherever you want/need to be, and to get the first listen on whatever people will be listening to next week, month, year, ever.

Lady Glock Photography was born out of that desire to seek the imaginative fragments in the world around me and my obsession with collecting moments of the every day urban experience.

Why Follow: Dafna Steinberg is masterful with the camera lens; her keen eye translates to an astute vantage on the greater social landscape – one word (read: hashtag): #peoplewatchingwithladyglock. Her timeline is that sarcastic-but-so-true walking buddy along the streets of DC. If nothing else, Lady Glock knows her way around an art gallery; if you follow her you might just stumble across Yoko Ono’s Wish Tree – I did.

His writing, clear, poignant and thoughtful, can not just be found here, but at other premium sites around the internet as The Couch Sessions, DC megablog Brightest Young Things, and Atlanta’s soon to be print Art Nouveau Magazine. He has interviewed everyone from established legends like Teena Marie, Darude, Rakim, Scottie B and Warren G, to rising names like Wiz Khalifa, DJ Blaqstarr, Nadastrom, the Trouble and Bass Crew and a plethora more of all levels of note in between! 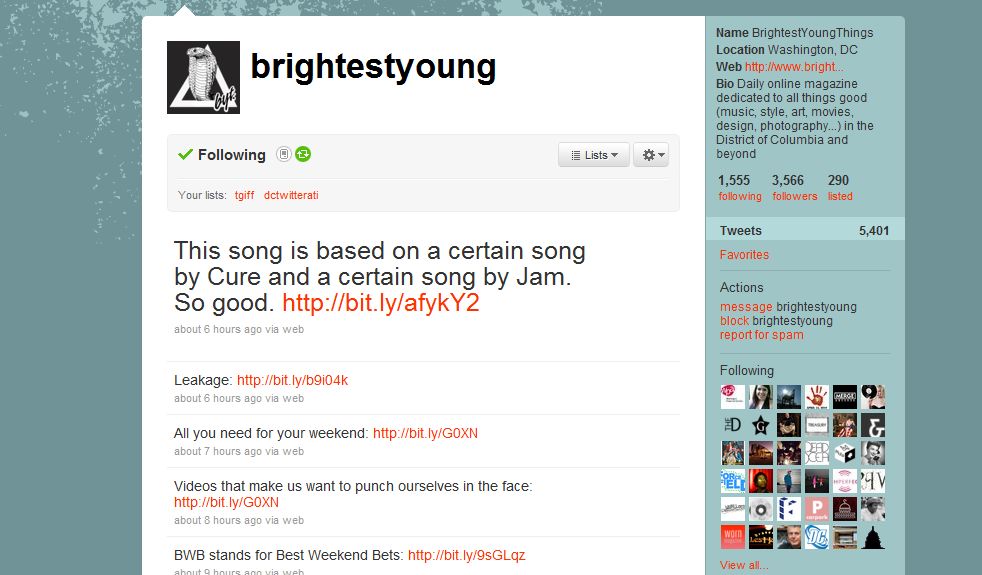 BrightestYoungThings is an online cocktail party for the interesting and interested. Our readers are the fast-wired journeymen of the new economy, constantly seeking out what is cool right now. It’s a never ending and fascinating field to keep up with and learn more about, and BYT is an interactive home for that quest. Just like anybody else, our readers want fun and love and are dumb and smart and mean and nice and intelligent and juvenile. We embrace their moods and obsessions and search for strange ways to entertain and inform them.

Why Follow: Like Metropolis‘ “Hub of the City:” this is the nucleus of DC’s creative class – injecting culture directly into the Capital’s consciousness, and disseminating it throughout the District.

Watch this space: they’re a bright bunch of young things… such BYTs catching all the lights