If you think this tragedy is over think again. There are still families out there in corners of this country trying to figure out what they are going to do to get their lives back to some normalcy. There are so many musicians who were well known in New Orleans that are totally unknown where they are now. Imagine building your fanbase or your work base in your workplace and suddenly it all disappears. – Jeff Beninato 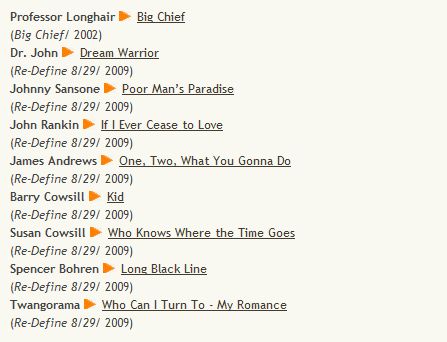 note: (a la Moka) remember 2005? New Orleans does, because in many parts of the city people wake up to August 29, 2005 every single day — still. The heart of New Orleans is the soul of the country; their music is a lifeline for millions of people the world over. Though Katrina broke the levees, she did not break their spirit. Tides continue to roll, and somehow the FEMA trailers are becoming as much a part of the city as beignets, brass bands, and Bourbon Street. What happens to a dream deferred? Ask 9th Ward musicians like Jeff Beninato, founder of the New Orleans Musician’s Relief Fund. The fund was started to get instruments back in the hands of local musicians, and in the midst of a stalled government reconstruction effort, NOMRF is catalyzing the grassroots reconstruction effort to revitalize the heart of the city and soul of the country — one string at a time. Re-Define 8/29 is a compilation album featuring local, and national, musicians who’ve come together to redefine Post-Katrina 8/29. A dream deferred is not dead, and neither is New Orleans.

sidenote: I started off with Professor Longhair because before Katrina deferred the dream, Big Chief was anthemic Nawlins soul.